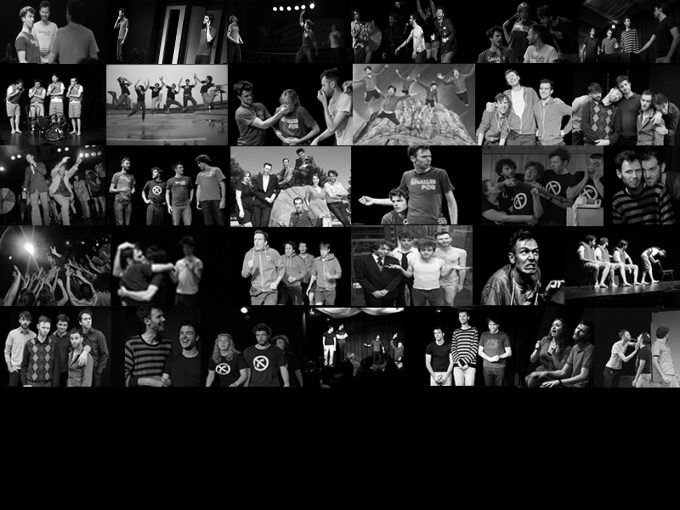 We are Uncalled For: a multi-headed beast of comedy. We’re made up of approximately six humans who have been performing together for over fifteen years. We’ve put on countless improvised comedy shows, we’ve written a series of theatrical sketch-comedy spectacles, we’ve hosted late night talk shows/dances parties, we’ve filmed videos. We’ve even produced Dramatic Theatre, but that was just for a laugh.

Uncalled For sprang forth, fully formed, from the forehead of Montreal — but now we have one foot based in Montreal and one foot in Toronto, so we’re constantly doing some serious splits. In addition to our two home bases, we have performed in Ottawa, Kingston, London (Ontario!), Winnipeg, Regina, Saskatoon, Edmonton, Vancouver, Victoria, Seattle, Portland, Chicago, New York City, Poland and the future.

We’re playing with possibilities. We’re looking at what-ifs. We’re explorers. Spelunkers in the caves of your mind. And while we’re down there, we plan on tickling whatever we find.

THE BRAINS OF UNCALLED FOR

MATT GOLDBERG is a Montreal based comedian, writer and storyteller. He is the founder and lead producer of Confabulation, a monthly all-true storytelling series based in Montreal, Toronto and Victoria. He also hosts the Confabulation podcast. Matt teaches English literature and storytelling in Montreal, and his three-year old daughter has told him he will be a penguin when he grows up.

MIKE HUGHES is a performer and teacher. He has performed extensively in Canada and in Europe. He has also worked as a character clown for the Cirque du Soleil. He is currently part-time faculty at Dawson College and teaches the 1st year Improv section at the National Theatre School. His passion for play development/original creation is most alive when working with Uncalled For. To date Mike has arrived at all 4,012 Uncalled For meetings ahead of Matt Goldberg.

DAN JEANNOTTE was born and bred in Montreal, but moved to Toronto after being accepted into the prestigious Actors Conservatory of the Canadian Film Center. Since graduating from the program, Dan has landed regular roles on the CW’s popular TV series Reign and on the Hallmark Channel series The Good Witch. He has also made appearances on Fargo, Dark Matter, Beauty and the Beast, Being Human and Red 2. His Serious Theatre work includes Trout Stanley, Equus, Possible Worlds (with Uncalled For), Cherry Docs, The Real Inspector Hound, Dracula, Hedda Gabler, and As You Like It. Dan did motion-capture and voice work for the lead role of Arno Dorian in Ubisoft’s massive hit Assassin’s Creed: Unity – for which he was honoured with the Montreal ACTRA Award for Best Videogame Performance. Dan credits the start of his acting career to Matt Goldberg, who once invited him to audition for an improv troupe he was putting together; Dan now owes Matt a life-debt, and will kill for him, if Matt so commands.

JACKY LALONDE has been creating and touring with Uncalled For for the past 9 years as their production manager, stage manager, lighting and sound designer. She has been working within the English language theatre community in Montreal for the past 11 years. She has had the pleasure of stage managing for companies like Centaur Theatre Company, Scapegoat Carnival, Repercussion Theatre, and Imago Theatre among others. She has been touring Brotherhood: The Hip-Hopera since 2012 as the lighting designer and technical director. Jacky is Uncalled For’s secret weapon: she is mysterious and rarely seen, but without her, the whole operation falls apart, like NASA without Houston, or the Keebler Elves without that big tree.

COLIN MUNCH is a multiple Canadian Comedy Award-nominated writer, director, actor, and improviser. He is the Artistic Associate of the Bad Dog Theatre Company, a founding member of the Bad Dog Repertory Players and Sex T-Rex, part of the internationally-acclaimed troupe Uncalled For, and a member of the Second City National Touring Company. He was a writer and the associate director of Spank! The 50 Shades of Grey Parody and assistant director of Lily Singh’s A Trip to Unicorn Island for Mills Entertainment, both of which had successful international tours. He is a frequent collaborator with Kat Sandler and Theatre Brouhaha, most recently appearing in Bright Lights. Colin was featured in NOW Magazine as one of ten artists to watch in 2016.

ANDERS YATES is a Toronto-based actor, writer and improviser. He is a former member of the Second City National Touring Company and a current performer and teacher with the Bad Dog Theatre Company. Anders was part of the original cast of the comedy/dance tribe Dance Animal and wrote sketches for their most recent hit show Dance Animal: Toronto. Recent stage credits include Slip (Circlesnake Productions), Toronto, I Love You (Bad Dog), Slap Shot: Live! (Second City), Humans (Tableau D’hôte), and all of Uncalled For’s major productions. Anders has appeared on film and television in Pirate’s Passage (CBC),  Helix (Syfy), Murdoch Mysteries (CBC), Saving Hope (CTV) and The Words (Benaroya Pictures). Anders is the tallest member of Uncalled For.

CAITLIN HOWDEN is a veteran of the Second City MainStage in Toronto, and received a total of fourteen Canadian Comedy Award nominations in four years. She is a founding member of Uncalled For and is also the co-creator of Ghost Jail Theatre. Now based in Vancouver, Caitlin is a member of the award-winning improv troupe The Sunday Service, and is a founding faculty member of the Blind Tiger comedy school.


AMANDA WALSH worked as a MuchMusic VJ before appearing as a series regular in the ABC/Lorne Michaels comedy Sons and Daughters. She’s appeared on TV series like Lost Girl, Two and a Half Men, Grimm, NCIS and Castle, as well as in films including Disturbia and The Ghosts of Girlfriends Past with Matthew McConaughey. Recently she won a 2016 Writers Guild of Canada Screenwriting Award for her work on the hit CBC sitcom Schitt’s Creek.

NICOLAS WRIGHT has appeared as a series regular on the sitcoms Manhattan Love Story, Accidentally on Purpose and The Business. He has been featured in the films White House Down, Afghan Luke and The Wild Hunt, and he starred in the HBO Canada series Sensitive Skin alongside Kim Cattrall. He was a writer on the blockbuster sequel Independence Day: Resurgence, and is now at work on the script for director Roland Emmerich’s Stargate reboot.